There are 0 vehicle in stock 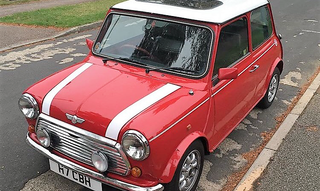 The Mini – A British Icon

In 1959 the British Motor Corporation created a car that was meant as an economical solution to a fuel crisis in the UK and an answer to the German bubble cars of the era, but little did they know it would go on to become one of the most iconic features of Britain even to this day.

With its unusual cone suspension and small nature it was the perfect go kart for the roads and they are an absolute laugh to throw into a corner even when a few of the wheels decide they don’t want to be on the road anymore. And if you’re really pushing it down a hill with the wind behind you, then there is a chance of eventually reaching 70+ mph.  Everything about the car was designed to be typically British and it is reported that the pockets in the side doors were sized to fit a bottle of Gin!

Throughout the 60s this car became extremely popular and there were new versions made although they were all still small engine city cars 10 years later however, a man named John Cooper took this small city car and modified it thinking, yes, this might well become a perfect rally car. It wasn’t exactly an increase of power to make eyes water with it going from 34 bhp to 55 but a variant of the cooper, the cooper s went on to win the famous Monte Carlo in 1964 and several more times during the 60s. Unfortunately the Cooper  was no longer produced in the UK after 1971 until rover brought it back in 1990 with the Cooper RSP (rover special production).

There were many other variants of the mini ranging from just general model updates over the years to the crazy Mini Moke which was essentially a jeep crossed with a mini, although none quite beat the looks of the original models. Throughout the 70s, 80s and 90s the mini name was bounced around different companies until we have what BMW own now.

Sadly the mini couldn’t last forever and in 2000 the remnant of BMC known as Rover, owned by BMW (ironically) at this time, was being sold off but BMW kept the iconic  MINI brand to make what we have today and on October 4th 2000 the last ever “classic” mini was made.

Will we ever see a car as iconic as this one again?

This month’s Staff Blog was by James Westley (Junior Technician). Click here to find out more about James.