There are 3 vehicles in stock 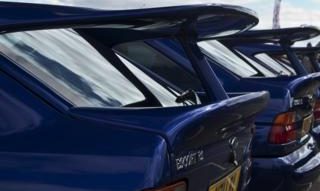 The Whale Tail – A Cosworth Story

1986 was the year ford introduced the whale tail on the high-performance 3 door hatchback sierra rs Cosworth , blowing the mind on the general public with this radical look! With a 2.0l 16 valve turbocharged engine, producing 204bhp, built by Cosworth. It reached  0-60 mph in 6.5 sec and a top speed of 150mph. The reason the engine was successful was the tuning capabilities with a simple upgrade chip upping the horsepower to 300 back in 1986 . At the time ford was dominating the touring car scene and the world rally championships  with the sierra Cosworth. In mark of this ford release a limit number of sierra Cosworth rs500s, named because they only made 500 of them. They were built with a bigger turbo, eight injectors and stronger engine that could be tuned to 400 bhp. It was built by aston martin tickford with a more aggressive front end and whale tail.

Later on ford release the sierra  sapphire rs Cosworth 1988 4 door saloon in 2wd and 4wd. Followed by the release of the escort Cosworth bringing back the whale tail from 1992 to 1996. These cars over the years were producing super car performance in power and speed.

Sadly the Cosworth was one of most stolen cars bringing them into group 20 insurance, you had to have two alarms fitted and maybe Rottweiler to stop them being stolen!! Even today they are still stolen on a regular basis and you have to protect them well.

The other sad point most cosworths have been broken up for parts as the engines are in high demand. They are fitted in pretty much any vehicle, especially mk1 and mk2 escorts , making the ford Cosworth extremely rare. Because of this Ford Cosworth are going up in value: a sierra rs500 sold at silverstone car auctions for a staggering  £114,000

Personal I feel Ford has lost its way with their high performance cars. Don’t get me wrong, the rs focus is a good car and Cosworth has been part of the engine in the new focus. But it would be nice to see the Cosworth badge on the back of a ford again and maybe see another whale tail!

This month’s Staff Blog was written by Christian Knight (Workshop Controller). Click here to find out more about Christian.