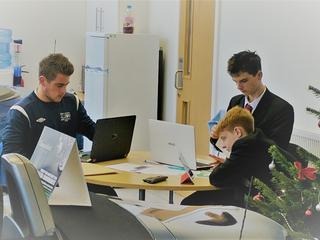 By this point Tom and Luke had checked the Polo, ordered and fitted the parts, washed and cleaned it and it was now ready for selling. Before they could sell it they needed to know where they were going sell it and how much they could sell it for. After a quick introduction to the 4 P’s of marketing (Product, Place, Promotion and Price), they set to work at researching where was the best place to sell cars.

They quickly discovered that online was a key platform when it comes to advertising cars. They touch on Autotrader, eBay and Gumtree as websites where they could advertise the car. Once on the Autotrader website they found other similar cars and noted down how much the cars were selling for and what they liked and disliked about the adverts.

They decided on the layout of their online adverts and what information they wanted to display in the text. They also picked out certain photographic shots that they could replicate to show off the car. They decided that a fair price in the market place would be £1250.